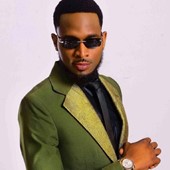 Oladapo Daniel Oyebanjo (born 9 June 1981), known by his stage name D'banj, is a Nigerian singer-songwriter, harmonica player, and entrepreneur. He has won several music awards, including the awards for Best African Act at the MTV Europe Music Awards 2007,Artist of the Year at the MTV Africa Music Awards 2009, Best International Act: Africa at the 2011 BET Awards, and Best-selling African Artist at the 2014 World Music Awards, Evolution award at the 2015 MTV Africa Music awards He adopted the stage name D'banj, a combination of his first name, Dapo, and his surname, Oyebanjo. D'banj is currently best known internationally for his 2012 summer hit "Oliver Twist", an uptempo dance fusion of Afrobeat and electronic dance music that topped the African charts 2011 and was a top 10 hit in the UK singles chart in 2012 reaching No. 2 on the UK R&B chart. As of 2016, D'banj is ranked to be the richest solo musician in Nigeria according to T.I.N Magazine. D'banj was born in Zaria, Kaduna State, Nigeria to a military officer who commanded an artillery regiment and a church dignitary mother who hailed from Shagamu in Ogun State. Due to his father's profession he moved several times within Nigeria and later moved to England. D'banj was expected to follow his father's military career and was enrolled to the Nigerian Military School at age eleven. However, D'banj resisted the system and disenrolled from the school after three years. While at the Military school he was a member of the elite drum corp of the Nigerian Army. From the Nigerian Military School he proceeded to another military owned institution Nigerian Navy Secondary School, Ibara, Abeokuta where he completed his secondary school education. D'banj was introduced to the harmonica by his late older brother, Femi Oyebanjo, who died in a plane crash at age seventeen. With D'banj's love for music being greater than his parents' military aspirations, he struggled for his parents' approval; this can be best heard through an album track, All Da Way from his debut album. Following the death of his 17-year-old brother, D'banj arranged all his possessions on his bed after they were brought home and just picked up his harmonica. I'd play it to remember him." Later, at university, he realised what his new skills with the instrument could bring him. "I'd go to the female hostel after lectures, and even if there was no electricity I could play there." He remembers learning Celine Dion's "My Heart Will Go On" after Titanic came out – "and that got me a lot of girls!" D'banj then proceeded to the Lagos State University to study Mechanical engineering but due to the constant strikes and several irregularities in the school he decided to withdraw. Plans to continue his studies as a mechanical engineer in London were derailed when he arrived in the UK in 2001, and met Don Jazzy who was trying to make it as a songwriter and producer. D'Banj started hanging around the studio, making ends meet while working as a security guard. "It was OK, because I did nights," he says, "so I could listen to music on my headphones." Don Jazzy told D'Banj he thought he was a star in the making, and sensing that the music scene in Nigeria was "blossoming", the pair returned to Lagos in 2004. That same year came the single "Tongolo"; the video was paid for by D'Banj's mother. His first endorsement was with an energy drink called Power Fist.

Rundown Funk U Up D'banj

Be With You D'banj

What You Want D'banj

Something For Something D'banj

Everything Is Ok D'banj

Afropop The pulse of hip-hop culture with an afrocentric twist!

Afro Hip-Hop The pulse of hip-hop culture with an afrocentric twist!